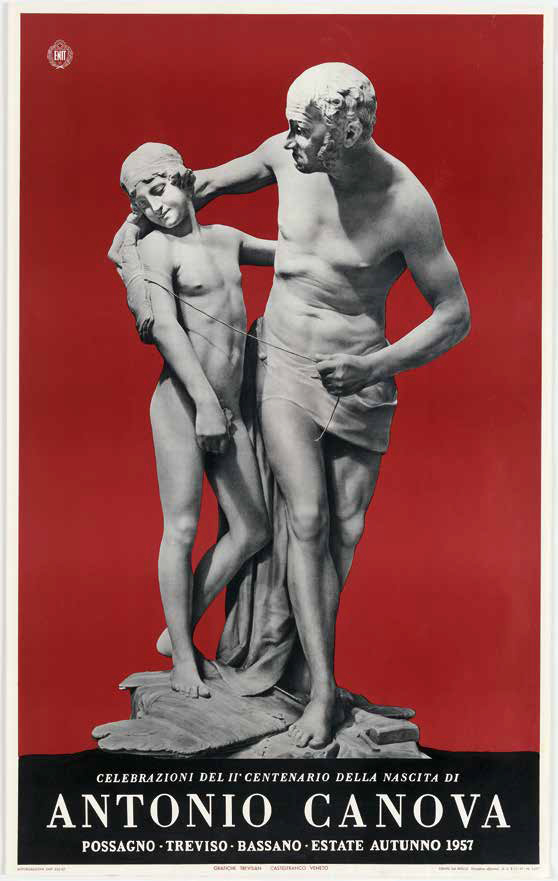 This section addresses the relationship between Canova and the city of Treviso, which is 43km (27 miles) from the artist’s home-town of Possagno. While Treviso provided the backdrop to much of Canova’s fame during his lifetime, this link has been cemented by the city’s attention to honouring his legacy afterwards, not to mention spearheading his critical reappraisal in the 1950s.

The news of Antonio Canova’s sudden death, on 13 October, 1822 in Venice, after a short illness, provoked considerable shock and dismay, in both artistic circles and among the general population. The inhabitants of Treviso were doubly impacted. For they had to endure the added sadness of seeing the funeral convoy pass through the town, on the evening of 15 October, on its way from Venice to Possagno, where he was to be buried. Organized by the Ateneo di Treviso — a learned society established in 1810 by Napoleon I, at that time the King of Italy — a ceremony to commemorate the life of Canova was held on 1 April, 1823. For the occasion, a marble bust of the artist had been commissioned from Luigi Zandomeneghi, who had been Canova’s pupil in Rome; a commemorative medal by Francesco Puttinati was also exhibited. In addition, a Cantata, in honour of Canova, by Gioachino Rossini, was performed for the first time.

The active involvement of the Treviso Ateneo in keeping Canova’s memory alive was not lost on Giambattista Sartori, Canova’s half-brother and heir. In 1837, therefore, he donated a massive volume featuring engravings of the artist’s works to the Ateneo. A remarkable artefact, the book is 90cm x 73.5cm (35 in x 29in) and contains 86 rami plates. In 1845, a case was constructed for this publication, so it could be hooked to a wall and exhibited in that fashion.

Post-1945, as Luigi Coletti — a professor in the University of Trieste, as well as the director of the Treviso City Museum — wrote, having languished somewhat for many years, Canova’s reputation experienced a reappraisal. A major exhibition of the works of Canova was held in Treviso in 1957. The Palazzo dei Trecento was the venue, and the “Mostra Canoviana”, curated by Coletti himself, was designed to be a high-profile event. While other shows on Canova had been held over that same period — as evidenced by the posters on display in this room — the Treviso exhibition was unique in its ambitious objective: to provide a critical overview of his entire career examining, by the canons of the time, Canova as, on the one hand, a stylist and, on the other, a poet. One section of the 1957 show has been reproduced here, to include contemporary photos by Giuseppe Fini, an early clay model for Canova’s Three Graces (le Tre Grazie), as well as some of the original display materials, which we have been fortunate enough to find. The idea is to convey the mood of the exhibition, and its importance in the context of the reappraisal of Canova, the artist. As a result of the 1957 show in Treviso, Canova re-emerged as an artist who had gone beyond the orthodoxy of neo-Classicism, to wit, the idea that nature was to be seen through the eyes of the Ancients and of their canons of what was beautiful, objective and predetermined, as expounded by German philosopher and archaeologist Johann Joachim Winckelmann (1717–1768). Canova’s poetic is grace, not just as an outwardly appealing appearance that would merge into mere eighteenth-century naturalism, or simple affectation, but grace as a soul-deep kindness, a moral value, and a supreme light of perfection.

This website uses cookies to improve your experience while you navigate through the website. Out of these, the cookies that are categorized as necessary are stored on your browser as they are essential for the working of basic functionalities of the website. We also use third-party cookies that help us analyze and understand how you use this website. These cookies will be stored in your browser only with your consent. You also have the option to opt-out of these cookies. But opting out of some of these cookies may affect your browsing experience.
SAVE & ACCEPT